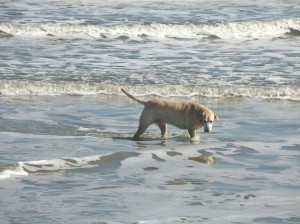 This is Kayla. She is what some dog lovers call my soul mate or heart dog. She shared her life with us for a brief 10+ years, and during that time the world was a better place for having her in it. Kayla passed on to whatever comes next for perfect, loving souls like hers on October 23, 2011, and this blog entry is dedicated to her – and to all the pets who have shared their lives and their love with us, and made us better people for it.

We adopted Kayla from our local shelter when she was two years old (her “gotcha day” was July 11, 2001). She was an overweight, undisciplined, wriggly mess of a dog, but from the moment I looked into her eyes I fell in love, and I am confident the feeling was mutual. Her name was Michaela, which means “who is like God,” a perfect name for her, which we shortened to Kayla (which means the same thing). She moved effortlessly into our home and into our hearts, and became part of our little family which, at the time, included Bob, Dugan our Siamese cat, and Sheba, our husky/shepherd mix.

Less than a year after we adopted Kayla, my father was diagnosed with terminal cancer. My parents lived in Southern California and we lived in Illinois when my family asked for my help when my father entered home hospice care. So during the fall of 2002 I took a leave of absence from my job and traveled west, leaving my entire human support system behind for six weeks. Fortunately my canine support system was with me, and Kayla quickly became an integral part of our hospice team as we took care of my dad, and each other, during his final weeks.

She licked tears when we cried, played ball or took a walk with us when we needed a break, and slept next to me every night so I wasn’t alone. Kayla, who was usually a ball of clumsy energy, was surprisingly gentle and calm around my dad, resting her head on his knee when he was sitting in a chair, and lying at the side of his bed with him when we were busy doing other things. On the day he died, she was one of six female souls in the room when he passed – along with my mother, sister, niece, me, and the hospice nurse – which seemed right and natural, and bonded us all powerfully.

After my father died Bob flew to California for the memorial service, and then we drove home together through Utah. We included a stop at Zion National Park where Kayla, barely out of the car, immediately ran down and waded in the Virgin River. We returned a year later to camp there for two weeks, and Kayla spent every one of those days in that river. We threw balls and sticks to her, and she never seemed to tire – in fact, she was always disappointed when we put the balls away and headed back to camp.

After that trip we camped all over the US, always making sure there was water nearby – whether it was a river, Atlantic Ocean, or a large Midwestern lake. She loved to swim, and she was darn good at it – so we tried to make it happen as often as possible because it brought her so much joy. The Virgin River was her favorite destination (she had such good taste) and I am so glad we returned there a year ago to camp for what turned out to be her last time. Of course it was her first stop as soon as we got out of the car, where she waded instead of swam due to some health challenges. But it seemed to bring her as much joy as ever, so we were thrilled.

She of course brought us joy too. Whether it was her goofy smile, tripping over her own feet on a slick floor, or clearing a coffee table with one sweep of her tail, whenever Kayla was with us we were in the presence of the Sacred. It’s been four months since we lost Kayla, and I still ache for her every day. I still expect to see her lying by my feet while I work at my desk, and I still reach to pat her her hip at night in our bed. She has left a huge hole in our lives and hearts, but I am so grateful for the time we had with her, however brief. 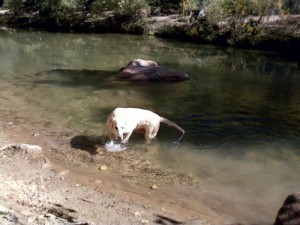 We had her cremated, so during the next two years we plan to take her ashes to all the places we camped with Kayla, and sprinkle some of them in all the lakes and rivers and oceans which were such a part of her living. Our first camping trip without her is coming up soon, where we will sprinkle some of her ashes for the first time. There will be sadness and many tears, I’m sure, and I hope also some joy as we introduce her little sister, Daisy, to the wonders of camping and swimming in the ocean.

Thanks for listening. ~ Susan

« Management and Exercise
Daisy has C.L.A.S.S. »

We are ready to help! We offer online separation anxiety training for dogs in Bloomington / Normal IL and anywhere in the U.S.