A client recently asked how long it would take to train her dog.  Because I knew her well and was sure there would be no chance of taking it the wrong way, I answered “Forever.”  She understood my meaning right away.

Other clients will sometimes ask the same question in a slightly less direct way.  “How much time do I need to spend working on ____ (insert the behavior here)?  When will he know to quit getting into the ____?”  The question boils down to “When will I be done training my dog.”

When I get the chance to respond to some variation of this question again, my answer might be, “You’re asking the wrong question.”  The right question is something more like, “How much time do I get to spend training my dog?”  Dogs are delightful companions, and training should be a rich, fun-filled experience that builds bonds of trust and friendship between a dog and their human.  That, of course, is why positive techniques like clicker training are becoming so much more popular.  Training your dog is a great way to relieve stress, have fun and get some exercise.  It gives you a chance to think creatively and share the satisfaction of learning new skills with your best friend.

Every day I’ll turn to my Yellow Lab “Kayla” and say, “Let’s do our tricks!”  She lights up and follows me eagerly to wherever we’re going to practice.  Sometimes the tricks are just fun to watch and do, like “spin” and “twirl” and “take a bow.”  Sometimes they have a more practical function like walking politely on a leash or waiting till her food dish is in place.  January is national “Train Your Dog Month” and Kayla is working on a new trick – crawling along the ground like a soldier.  One big key to success though, no matter what behaviors we work on, is the attitude we bring to the session.  In positive reinforcement training, it’s all tricks for the dog.

But back to “how long?”  On the one hand, changes in behavior can often be brought about more quickly than many people expect.  Today I worked with a nice family raising a Jack Russell Terrier puppy named Gilligan.  He’s a delightful little guy, smart as can be, full of energy and curiosity and enthusiasm.  Not having any experience in training, his family was baffled by his continuous jumpy, climbing, pushy behavior.  A few minutes of instruction in how to ignore that unwanted behavior, and prevent it from being reinforced, and it was going away almost by itself.  Another tip on noticing and rewarding the frequent behaviors of having all four paws on the ground, sitting, lying down, and making calm eye contact, and he was making his way politely in front of each family member awaiting attention, praise, and a few tasty bits of diced hot dog.  In less than one hour, a frantic little dervish began his transformation into a polite and eager little member of the home team.  Way to go, Gilligan!

Of course, the progress and permanence of those changes depends on how consistent and committed Gilligan’s family is in practicing and continuing his training.  If polite sits and eye contact stop resulting in attention, treats and opportunities to play, they’ll melt away in favor of some other strategy that gets the attention of his people, even if it’s not as well regarded.  And of course, the longer he’s been practicing, the longer it’ll take for a behavior to go away, for better or worse.

Behavior in living creatures is not like the software in a computer program, where once it’s installed it’s there forever.  It calls for patience and practice, and setting things up so that your dog is going to succeed almost all of the time.  Training your dog is something that, if you’re a responsible and caring guardian, you’ll do for your dog’s whole life.  And hopefully you’ll come to feel that doing it isn’t a chore but a joy.

So think of it like this, training is forever, and really, that’s good news. Happy training!

I’ll Split It With you » 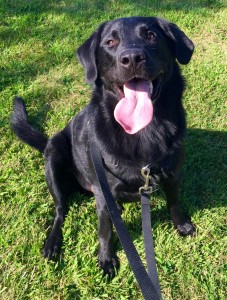 We all get frustrated when our dog does something she isn’t supposed to do – like chasing the cat, raiding the trash, or jumping up to check out the counter (or our guests), etc. Our usual response is to get frustrated and tell our dog “NO!” in order to get her to stop. But there […]

Bob was recently on WGLT with Laura Kennedy on “Animal House” to talk about the best way to train your dog to do fun tricks and good manners. Listen here. And watch the video of Bob and Daisy demonstrating some of her tricks!

It’s Cold – Keep Moving! As I mention often to my clients, one of my favorite training proverbs says, “A tired dog is a well behaved dog.” Conversely, a dog who is bored and bustling with pent up energy is a problem waiting to happen. Exercising our dogs can be challenging when it’s too cold to […]

“He thinks he’s alpha.” “We have to establish the dog’s rank in our family.” Let me persuade you what scientists have known for a while – it just ain’t so! No misunderstanding harms our relationship with our dogs more than “dominance theory.” Poorly done research in the mid-20th century mistakenly concluded that wolves fight to […]

We are ready to help!