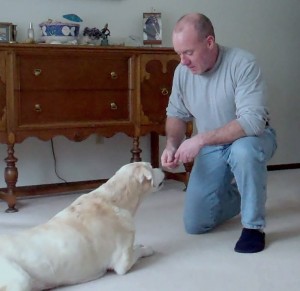 Bob and Kayla work on “splitting.”

As the old proverb says, a journey of a thousand miles begins with a single step.  The obvious point is that large and daunting tasks need to be approached in small, doable increments.  This is true for work, raising a family, personal growth, and certainly training our dogs.

One of the most helpful techniques I’ve learned in training advises, “Split, don’t lump!”  Here’s what it means.  Let’s say I want to train Kayla to crawl along the ground like a soldier, which I do. (It’s a fun trick, that’s why!)   The temptation is to picture and begin coaching for a paw over paw belly crawl across the entire living room.  Assuming that sort of thing isn’t already normal, self-motivated behavior, starting with that as the immediate goal is setting Kayla up for frustration and bewilderment when I cue her “Crawl!”

The better way to begin is to split up the ultimate behavior I’m working toward into tiny pieces that are easy to imagine and elicit.  Splitting a long crawl into tiny pieces might start with just a small lean of the head forward while she’s in a “down.”  It’s easy to lure and reward a head movement like that.  It might even happen spontaneously.  In any case, rewarding that little move starts the process out on a successful note.  It’s easy – something she can repeat confidently and get a treat for on the very next try!  Right from the beginning she’s going to enjoy this learning curve.

From there, I might build simply to her leaning slightly further forward with a bit of body weight, or perhaps a quicker more deliberate lean for several repetitions.  Then perhaps a slight move of one paw forward in order to reach the lure as I hold it back a smidge.  Next, shift the whole mass of her body forward a little, then a bit more… you see the pattern.  Before long she’s crawling along a couple of feet at a time and building confidence with each repetition.  Now let’s reward a little more speed for a while.  Now let’s work on covering distance.

As the title of this installment suggests, splitting up the behavior into learnable, doable bits leads to progress.  By contrast, “lumping” more and more pieces of the final product together (that is -asking for more of the whole thing), lessens the chance for success and confidence, and increases the likelihood of frustration, especially early on.

So perhaps you have a few behaviors that are higher priorities than having your pup crawling on her belly.  What if you just want a nice “sit” at the door to make clipping the leash easier?  Start as if you’ve never asked her to do it before, and split the behavior up.  Have tasty treats handy and just wait for a bit of stillness to reward.  When she can be still and focus on you for a few seconds, cue a sit, or lure it.  Reward and praise generously!  Now, sitting still while you reach just a few inches toward her collar gets a treat.  When that’s solid, a few more inches.  See the pattern again?  It’s asking a lot for an excited dog to sit still for a leash clip when the great outdoors is beckoning alluringly just a few feet away.  Rather than lumping a sit/stay/collar grab/leash clip, split the complex behavior into tiny bits.  Maybe practice when she’s a little tired from a fetch session.  Maybe practice in the living room away from the tantalizing door.  You and your favorite pup will get there in no time.

Splitting keeps training successful and fun, and allows your pup to enjoy learning what you’re asking her to do.  So next time you need your dog to learn something new, make a few minutes to practice from the beginning, and tell her, “I’ll split it with you!”

« Training Is Forever
Teach It, Don’t Preach It! (Why merely intensifying a cue won’t work.) »

We are ready to help! We offer online separation anxiety training for dogs in Bloomington / Normal IL and anywhere in the U.S.